INVOKING ST. JEROME is a title that takes us to the work of the French writer Valery Larbud, ‘Sous l’invocation de Saint Jérôme’, published in the middle of the 20th century. The first part of the book is dedicated to the patron saint of translators and begins with a quote from Seneca, who recommends keeping portraits of the great men and honouring the days on which they were born.

Following the advice of these great masters, I will describe here and over the coming months the results of a quest I have taken upon myself over several years: to seek out in Portugal the iconography about St. Jerome that survives to this day. It involved endless kilometres of travelling, which I look back on with fond memories, visiting churches and monasteries, cities, towns and villages.

My starting point was the Santa Maria de Belém Monastery, more commonly called Mosteiro dos Jerónimos (Jerome Monastery). One would expect a vast iconography dedicated to the Saint there. Indeed, despite the rigours of time, the Patron Saint of Translators is represented in sculptures outside the Monastery, and albeit in much fewer number, inside the building too, where some pictures and sculptures can be found in the church, the chancel and the sacristy.

The first photograph shows St. Jerome protecting King Manuel I, founder of the Monastery, who was an ardent devotee of his. The statue is on the left of the doorway of the main entrance into the church. Not all the tourists who file past this site will put a name to the Saint. However, the bare chest, the stone in his hand and the lion clearly identifies who he is. That was the sculptor’s choice, who placed the Patron Saint on top of the crest of the Kingdom alongside the King. Some of these symbols are also found on the picture (second photograph) attributed to Avelar Rebelo, the 17th-century painter. But here, St. Jerome is not a penitent in the desert, but rather the cultured 14th-century translator of the Bible. 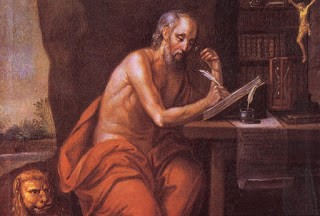