A Coffee and a Book at the Shadow of A Tree

If you are going to the capital city of Argentina, one of the most fascinating cities of South America, please accept our suggestions for a coffee and a book:

Café Tortoni. Near the legendary Plaza de Mayo, in a beautiful Art Deco ambiance, recalls the memories of great intellectuals that used to have their meetings here, as part of “La Peña”, under the guidance of the Buenos Aires painter Benito Quinquela Martín. This society of Arts and Letters gathered famous names such as Garcia Lorca, Luigi Pirandello, Ortega Y Gasset, Arthur Rubinstein, and, of course, writers such as Borges and Cortázar, and was able to attract to their meetings Albert Einstein.

Quino, the author of the famous character Mafalda and other Argentine cartoonists are paid homage in Paseo de la Historieta, in the well-known San Telmo quarter.

La Biela is another café where genial writers Jorge Luis Borges and Bioy Casares used to sit for a coffee: if you’re lucky, you can still meet them.

El Ateneo Grand Splendid, the classic theatre from the early days of the 20th century is now one of the most beautiful bookshops in the world. In such a magnificent décor, the difficulty, however, will be to choose “one” book.

At the shadow of this Tree:
The Gomero de La Recoleta: a stunning 200 years’ rubber tree which branches stretch out so widely that statues have been sculpted to support them.
Yes, this is the place for you to have a coffee and read a book at the shadow of A Tree in the mythical city of Buenos Aires. 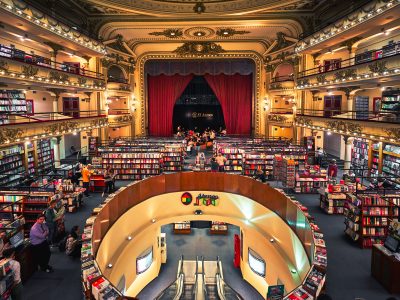