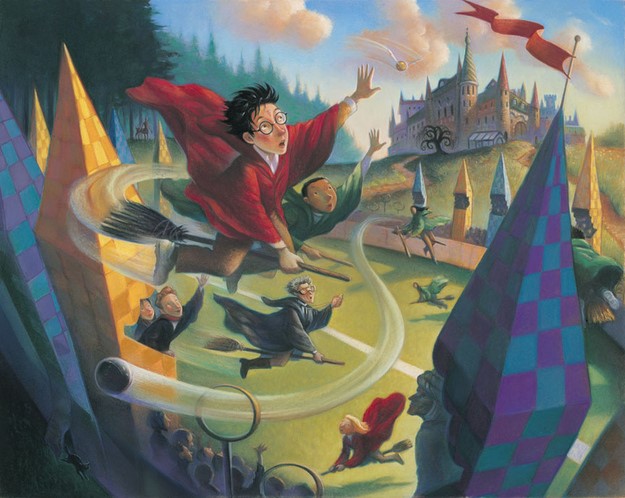 and the academic robes of Porto University inspired Joanne Rowling (J. K. Rowling to us “Potterheads”), who, according to her biography, wrote her first book Harry Potter and the Philosopher’s Stone in our famous Café Majestic:
www.cafemajestic.com

Likewise, the name of one of the founders of Hogwarts School of Witchcraft and Wizardry, Salazar Slytherin, is a reference to the dictator Salazar who governed Portugal between 1928 and 1968.

The story of Harry Potter is more than a simple saga for my generation who were adolescents at the time of the first publication and who followed the adventures one by one as they came out; it was a literary milestone.

And while some argue that the work presents an overly simplistic division between good and bad, the truth is J. K. Rowling created extremely complex characters which, still today, divide opinions among the most fanatical of Potter fans: some ooze evilness, but redeem themselves, while others who are more popular end up surprising the reader.

As you read each instalment you cannot fail to notice a very obvious evolution in the writing, starting with the first book that has a more childlike approach (from today’s perspective) and ending in the seventh volume, with more serious prose that leads us to confront certain realities about life and death.

In addition to the Harry Potter saga, Rowling has published other spinoff stories that are presented in other forms of entertainment. “Fantastic Beasts and Where to Find Them” is a film (with a book of the same name) that guides the viewer through the different creatures in this world, where the “author” is the main character and is a prequel to the main saga. The cinema sequel comes out this year. Another book published was “Harry Potter and the Cursed Child”, a sequel of the main saga, but in the form of a theatre production, which has played in London and has productions planned for the USA and Australia.

J.K. Rowling seems set on not letting her love wane for the saga she created over 20 years ago. And the true fans of the series will also make sure it stays very much alive. Our hope is that future generations equally enjoy the saga and nurture this love for many years to come.